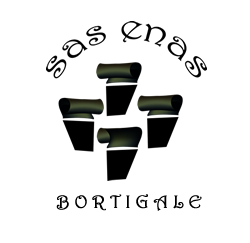 The Association of Culture and Popular Music Sas Enas was officially founded in the village of Bortigali, Sardinia (Italy) on February 2002

The goals of the Association are to support research and deeper knowledge of traditional Sardinian culture as it pertains to the village of Bortigali. In particular, this pertains to two styles of singing known as “chidasantinu” (Holy Week) and “a cuncordu” (four voices) and poetry written by poets from Bortigali. Sas Enas is a non-profit organization, and its primary mission is to maintain and give value to the traditional singing styles of Bortigali; secondary goals include promoting and prioritizing recordings and publications of this music, to organize public performances, presentations, conferences, and to foster community dialogue around these themes. All of these approaches are used to provide greater knowledge, for Sardinians and for those from outside of Sardinia, of Sardinian culture and minoritarian language communities such as Sardinian (Sardo).

“The association began their activities in 1995, organizing performances and working closely with the local chamber of commerce and with the three Confraternities associated with the village of Bortigali. One important part of Sas Enas’ activities is focused on a style of singing in four voices associated with the religious rites of the Catholic Holy Week, the primary religious event in which the Confraternities are understood to have been born. From this time period, in Bortigali and also in other villages, Papal Bulls authorized the birth of three Confraternities in the seventeenth century in Bortigali to aid in the celebration of Holy Week. In Bortigali, these were (and remain): Santa Roghe, Sas Ánimas, and, at the beginning of the 18th century, Su Rosáriu.

For centuries, the songs of Holy Week (Chidasantinu) were practiced inside the Confraternity and orally transmitted, both within and outside of the formal Catholic liturgy. It is also believed that certain songs were only sung specifically for Holy Week each year, and that from these traditions the style of singing now known in Sardinia as “cantu a cuncordu” was born (see Lortat-Jacobsen & Macchiarella 2012 to learn more). By the end of the 1950s, however, as a result of disagreements between the then-parson and the canon, Agostino Carboni, certain ritual practices ceased for approximately twenty years. Beginning in the early 1970s, and thanks to the activity of the Oratory of Saint Palmerio,we again began to see signs of Su chidasantinu come back to life (for more on this, please see the books of Italo Soro on the polyphonic traditions of Bortigali). But it’s not until the mid-1990s that we can say that there was a fully blown rebirth of traditional music in the village, in part due to the support and activities of the Association of Sas Enas and of which the members of the organization areduly proud.

After the forced interruption of singing practices, the repertory of chidasantinu returned with a particular emphasis on three songs: the Miserere (“Su Miserere”), the Stabat Mater, and the S’Otava Trista. Of these three, the first two are sung in Latin, and the third in the Sardinian language. In Bortigali, each song also became specifically linked to the memory of particular singersmentioned in the previous paragraph who were known to sing these songs. These songs were then taught and transmitted to members of the Association and village residents via Italo Soro (1939-1988) who, despite his premature death, was able to transmit everything he learned from the older generation of singers to the younger singers still singing, today (to learn more, see other references listed).

Since 1998, thanks to the collaboration of the Confraternities in the village, and in particular to our work with Confraternity members Antonello Satta, Genesio Musa of San Palmerio, Antonio Pes of Rosáriu and Raffaele Satta di Santa Croce, Sas Enas has been able to ensure the presence of each of the three singing groups participating in the paraliturgical events of the Holy Week. In tandem with this work, Sas Enas has dedicated particular attention to the written and recorded documentation of each of these practices, with the hopes of leaving adequate documentation for future generations, as well.

Also in 1998, Sas Enas actively collaborated with Professor Pietro Sassu and with jazz musician, Gavino Murgia of Nuoro. This worked was presented on December 20th in Bosa, at a conference titled “Anthropological Research for the Revitalization of Cultural Practices of Margine, Planargia and Montiferru” (regions in Sardinia). The results of this conference were unfortunately never published, due to the premature death of Pietro Sassu.

The following year, Sas Enas curated the recording of two pieces (“S’Ottava Trista” and “Seria e Ballu”) which were included in the album compilation, “Tajrá La Voce Creativa” (CD, Cara 108) and curated by another cultural association, Associazione Caranas. This compilation focuses on singing styles on the island of Sardinia and includes traditional songs along with experimental and contemporary music.

The Association Sas Enas has also focused on the recuperation of historical recordings. This includes recordings broadcast on the Italian radio station, RAI, shortly after the Second World War. We know that a recorded copy exists of the Stabat Mater, although as of yet we have been unable to obtain a copy. Another recording broadcast on RAI during this period was a S’istudiantina, dating to the 1950s, and located by professor and ethnomusicologist Ignazio Macchiarella in the RAI archives in Cagliari, Sardinia.

Beyond this historical and recuperative work, Sas Enas has also focused on songs and singing practices in the present moment. This includes introducing (and re-introducing) multipart singing to residents of Bortigali, in Sardinia, and beyond.

Other performance-focused events organized by the Association include ones in various churches on the island (Santu Lussurgiu, Tempio, Bortigali, Bosa, Nughedu San Niccoló, Bonnannaro, Aidomaggiore). Ones of particular import include the conference/performances of 17-18 March, 1998, in the auditorium of the Sacro Cuore of Nuoro, and at the theater Via Trentino in Cagliari, organized and introduced by Professor Pietro Sassu. Also in Cagliari, on May 14th of 2005, the singers of Sas Enas participated in a day of teaching hosted by the music conservatory, organized by professor Macchiarella for students in his ethnomusicology courses.

In sum, a series of intense, sustained and varied activities have been supported by the Association of Sas Enas in Bortigali. Importantly, many members of this Association have now discovered for themselves the joy of discovery and research into the past, in the continued attempt to infuse singing and music into daily life in Bortigali and beyond.”

This website uses cookies to improve your experience while you navigate through the website. Out of these cookies, the cookies that are categorized as necessary are stored on your browser as they are essential for the working of basic functionalities of the website. We also use third-party cookies that help us analyze and understand how you use this website. These cookies will be stored in your browser only with your consent. You also have the option to opt-out of these cookies. But opting out of some of these cookies may have an effect on your browsing experience.
Necessary Sempre abilitato
Necessary cookies are absolutely essential for the website to function properly. This category only includes cookies that ensures basic functionalities and security features of the website. These cookies do not store any personal information.
Non-necessary
Any cookies that may not be particularly necessary for the website to function and is used specifically to collect user personal data via analytics, ads, other embedded contents are termed as non-necessary cookies. It is mandatory to procure user consent prior to running these cookies on your website.
ACCETTA E SALVA